2019 was the year of endings, with both Game of Thrones and Star Wars: The Last Jedi airing their controversial conclusions, and beloved YA series like Nevernight by Jay Kristoff and The Folk and Air Trilogy by Holly Black wrapping up their intense and lovable adventures. However, 2020 will witness the return of some familiar faces as well as new beginnings for much loved authors, characters and franchises, and it’s fair to say that I am excited. Here’s my shortlist for this years most anticipated books and films, and I’d love to know what you’re most looking forward to in the comments below!

House of Earth and Blood by Sarah J Maas – The Queen is back! Although I still haven’t finished the Throne of Glass series I am ready to step into another one of her fantastical worlds and adventures. There’s no doubt that this series will meet all my high expectations and just from reading the synopsis I can already tell that its going to be one of my favourite reads of 2020! Also can we please discuss that cover, because its stunning and beautifully detailed!

The Ballad of Songbirds and Snakes by Suzanne Collins – It’s about time the Hunger Games fandom awoke from their slumber, and rose in a united anticipation for the opportunity to revisit the fearful world and society of Panem. Set sixty-four years before the original trilogy, the novel will open with the reaping of the 10th Hunger Games. Update: It’s just been revealed that this is going to be a President Snow origin story and now I’m not as excited.

Chain of Gold by Cassandra Clare – I haven’t read anything from Cassandra Clare in years but she never fails to transport us back to her wonderful world filled with Shadowhunters, Vampires, Werewolves and Fairies. By the looks of things I’m going to have to finally read the Infernal Devices series as this book sounds like the perfect bridge between her other series and character relationships!

The Invisible Life of Addie LaRue by V.E Schwab – Last year I read Schwab’s Darker Shade of Magic series and she soon became one of my new favourite authors, so when I heard she was releasing another book I had to check it out. As expected the novels premise is hauntingly unique and magically wonderful and I’m already sold.

Empire of the Vampire by Jay Kristoff – Another author I discovered last year, and instantly fell in love with. Like Schwab, Kristoff’s writing is something I admire and aspire to replicate, it’s always filled with unique and descriptive metaphors that come to life on the page. After the whirlwind that was Twilight, I’m now more than ever ready for another vampire adventure.

Black Widow (Disney, 1st May 2020) – After the events of Avengers: Endgame, I think its only right that we finally get an origin story for Black Widow! Am I emotionally prepared? No, but there’s no way I’m missing this!

Dune (Warner Bros, 18th December 2020) – I need something to fill the sci-fi void in my heart and I think this adaptation will do just the trick. The cast looks incredible, and will star Oscar Isaac, Timothée Chalamet, Zendaya, Jason Momoa and more! All the concept art is already getting me overly excited, and is continuing to raise my expectations.

Eternals (Disney, 6th November 2020) – This is another film with an incredible cast and vast array of characters, I’m looking forward to discovering more about them and their roles within the much-loved comics.

The Last Thing He Wanted (Netflix, TBD) – Joan Didion is one of my favourite authors so when I heard that one of her books was being adapted I got quite excited. I’ve yet to read The Last Thing He Wanted as its very different to what she usually writes, but nevertheless its still made its way on to my ever-growing TBR list. Starring Ben Affleck and Anne Hathaway, the film follows a veteran D.C. journalist who loses the thread of her own story when a guilt-propelled errand for her father who is dying, thrusts her from byline to unwitting subject in the very story she’s trying to break.

No Time To Die (8th April 2020) – Daniel Craig is one of my favourite Bond’s so I’m sad to see him go, but just from the trailer its clear that he’s going in style.

One thought on “Most Anticipated Books and Films of 2020”

QotD: What book would you love to read again for the first time? ✨
I’ve FINALLY started a bookstagram! Yay! ✨ 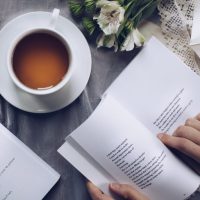 Finding the story that is waiting for you.

Because paradise is a library